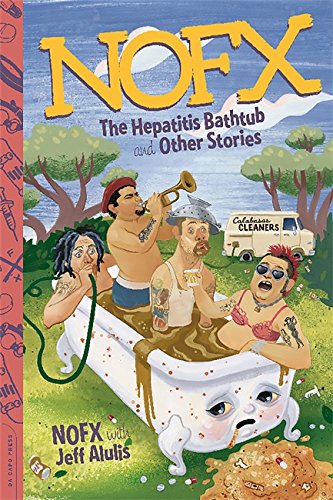 NOFX: The Hepatitis Bathtub and Other Stories is the first tell-all autobiography from one of the world's most influential and controversial punk bands. Fans and non-fans alike will be shocked by the stories of murder, suicide, addiction, counterfeiting, riots, bondage, terminal illness, the Yakuza, and drinking pee. Told from the perspective of each of the band's members, this book looks back at more than thirty years of comedy, tragedy, and completely inexplicable success.

Review
I can say with certainty I've never read a rock biography with such balanced elements of sensation and sincerity. Like the few great band bios, the array of experiences described in The Hepatitis Bathtub are enough to set anyone into contemplation about strength and perseverance, love and depravity, camaraderie, and a place for misfit rock and rollers in a society that to this day clings to rigid standards. A must-read for punks new and old and an eye-opening read for all new-comers. --John Cameron Mitchell, Hedwig and the Angry Inch

NOFX and Fat Mike are amongst the most powerful influences of my genre. This book is a must own for anyone who still cherishes what is left of Punk and Rock 'n' Roll. --Joan Jett

Not for the faint of heart, and therefore HIGHLY recommended to EVERYBODY. --Amanda Palmer


NOFX formed in 1983 and has since released over a dozen albums, sold more than eight million records, toured 42 countries on six continents, founded one of the most successful indie labels in the world, and starred in their own reality TV show. They are based in California.Jeff Alulis is a writer, filmmaker, and musician living and working in Los Angeles.